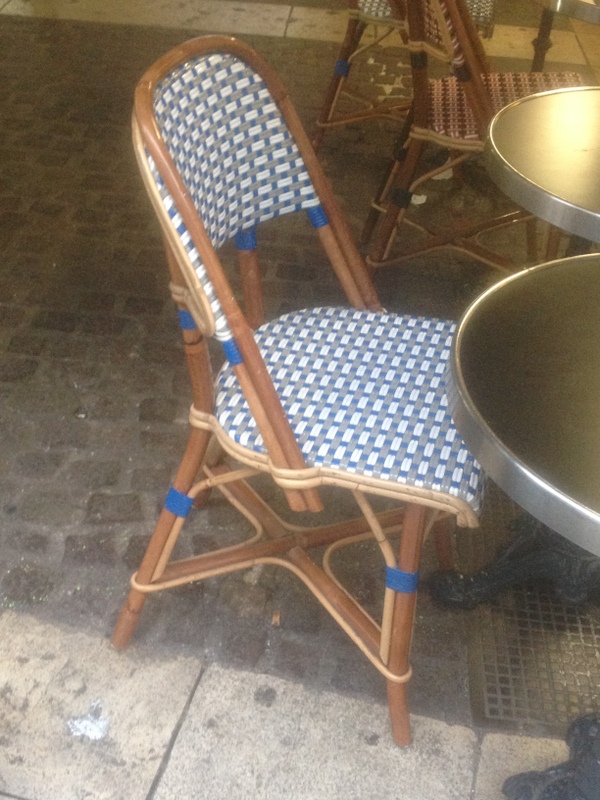 A few people have praised the cover illustration and general production values of my new HappenStance pamphlet. Gillian Rose’s wonderful design of two chairs has a beautiful simplicity to it, suggesting both a conversation between two people, but also the absence of people, a conversation that was. Chairs on pavements outside French street cafés are such a symbol of Paris. But after the Paris attacks, exactly 1 year ago today, those chairs took on a whole other meaning for me: conviviality, friendship and innocence, but also vulnerability, danger, death.

Tens of people died that Friday night, shot while eating and drinking at a café or restaurant on the north bank of the river (rive droite). A week later, when I went to meet a friend for a coffee locally, and we met outside a brasserie, he went immediately to sit down on a chair on the pavement, and I have to admit I hesitated, froze. Was it really safe? But I did sit down, and people did sit on those chairs, the city did carry on. Such an everyday act I would never have questioned before, bit it was now as if sitting on a chair in the street was itself a brave act of defiance.

When thinking about a cover image, I thought immediately of those chairs. Of course, there are more obvious images for Paris: the Arc de Triomphe, the Eiffel Tower, the Sacré Coeur. Tourists attractions. But to me the ordinary café chaise was quotidian and more fitting because it was everywhere, outside the usual places where the horrors of that evening took place. I started photographing the chairs, only to realise that they are all so different in colour, shape and material: stained wood, painted metal, moulded plastic. 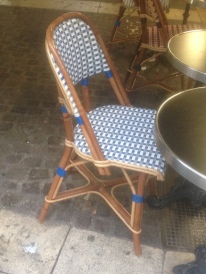 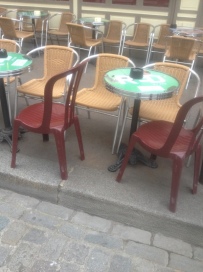 My initial idea was of two chairs, one upright and one tipped over. This would somehow represent the drama of that evening, and allude to one of the poems ‘Chairs on Pavement’ (actually what I had first envisaged the pamphlet would be called). I took photos of chairs around Paris and Nell at Happenstance sent the images on to Gillian, who has been producing the distinctive illustrations for her pamphlets for several years now. A few weeks later she came back with several drawings, all serious contenders for the cover. 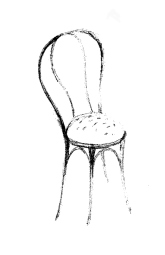 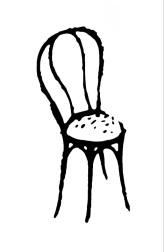 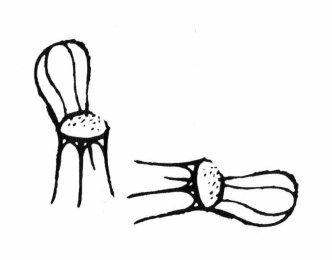 From a first sketch Gillian came up with a pen and ink image of a chair, which had a striking clarity and boldness to it. For me it was a very French chair, the curved back of dark wood and round seat, either cushioned or of woven raffia, so typical of the old fashioned café terrasse. The image of two chairs, one fallen, was unsettling and violent. Though it was what I had had in mind, I wondered if it was perhaps a little exaggerated, and maybe even ‘explaining away’ my poem ‘Chairs on Pavement’. Gillian also came up with a different image and one that is also an emblem of the city and its river, capturing what we see as we walk along the quais of the Seine at night: the lamp post or lampadaire. 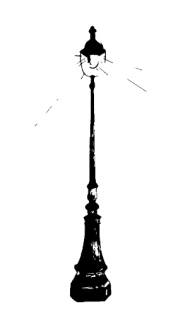 This was a strong image. After all, Paris is the ‘City of Light’. And light means hope, courage, resistance, life. You see these lamp posts, in black and in dark green all around. But then I realised I’d seen them along the bank of the Arno in Pisa, that you see them in London too along the Thames, and suddenly I saw them all around the Vrijhthof in Maastricht too. So were they really so unique, distinctive? I ummed and aahed and asked lots of opinions, and in the end, feel I made the right choice in the two chairs facing each other, side by side. This image most convincingly said Paris, and was a subtle reminder. 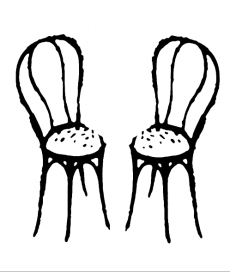 Two chairs. Two people. A conversation. Like the left-hand page and the right-hand page of the pamphlet. A poem on each page. Poems in conversation with each other. Poems that converse between writer and reader. The city as a conversation. As thousands of conversations. All the cafés, all the conversations that Friday evening, and the conversations held in the days that followed. The chaise, a monument to meeting-up, to words and laughter, the food of friendship. My thanks to the talented Gillian Rose.

One thought on “Choosing the cover image”